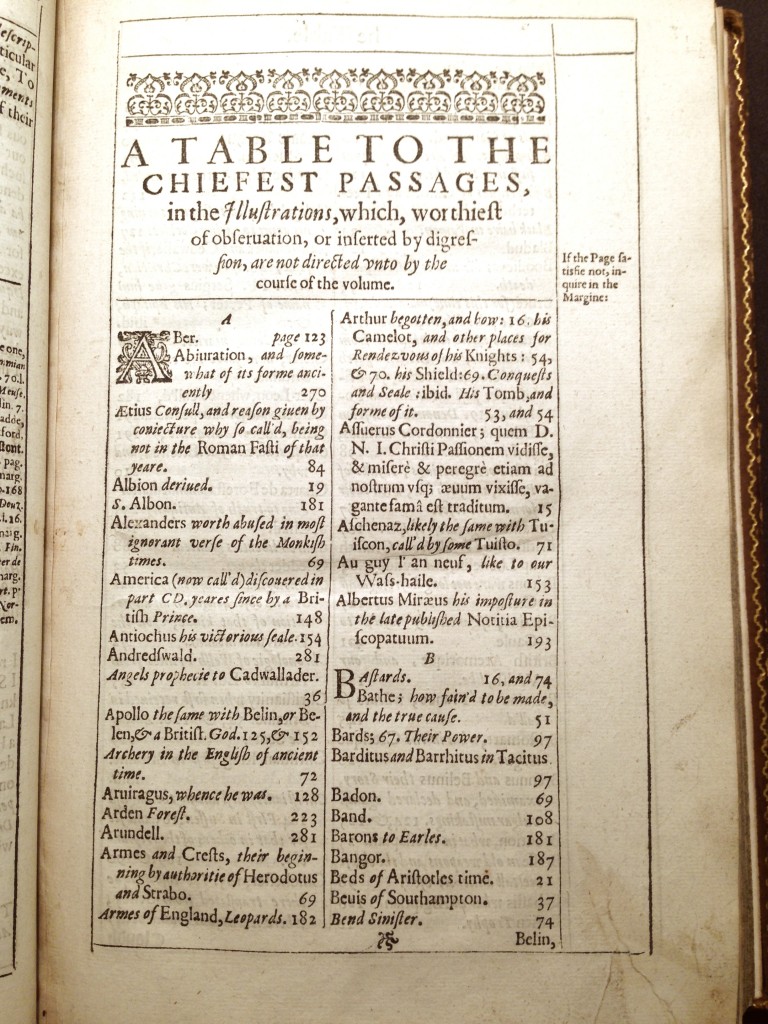 At some point perilously close to publication in late 1611 or even possibly after Poly-Olbion had been submitted to the Stationer’s Register on 7th February 1612 (printers and booksellers would do this in advance of publication to record their intention and right to publish a work),  Drayton approached the young lawyer and scholar Selden, whom he may have known from the Inner Temple or Camden and Cotton’s antiquarian circles, to write the accompanying historical exegesis to his great work.

In his preface, Selden writes of the small amount of time he had for the task of composing the ‘Illustrations’, which he says  ‘was but little more then since the Poem first went to the Presse’ and indeed his Preface was the last part of the first edition to be printed  May 9th 1612. Indeed if Drayton’s poem was complete and being prepared for the press as Selden came on board, then the addition of the prose commentary appears an afterthought rather than something long in the planning.

Despite his contributions being solicited so late in the book’s creation, Selden’s “Illustrations” were vital to the aims of Drayton’s project. Ruefully, Drayton felt that his poetry needed both apology and annotation, in order to rescue it from the “Idle Humerous world” where “Verses are wholly deduc’t to Chambers, and nothing esteem’d in this lunatique Age, but what is kept in Cabinets.” Selden’s often censorious critic and Drayton’s muse create a fascinating dialogue about the nature of historical poetry and readership.

EXTRACT: KING ARTHUR’S SHIELD FROM THE ILLUSTRATION TO SONG IV
The sacred Virgins shape he bare for his device.
ARTHURS shield Pridwen (or his Banner) had in it the picture of our Lady and
his Helme an ingraven Dragon. From the like forme was his father called
Uter-pen-dragon. To have terrible crests or ingraven beasts of rapine (Herodotus
and Strabo fetch the beginning of them, and the bearing of armes from the
Carians) hath been from inmost antiquity continued; as appeares in that Epithet of
Γοργολόφας, proper to Minerva, but applyed to others in Aristophanes, and also
d in the Theban warre. Either hence may you derive the English Dragon now as
a supporter, and usually pitcht in fields by the Saxon, English, and Norman Kings
for their Standard (which is frequent in Hoveden, Matthew Paris, and Florilegus)
or from the Romanes, who after the Minotaure, Horse, Eagle, and other their antique
ensignes tooke this beast; or else imagine that our Kings joyned in that generall
consent, whereby so many nations bare it. For by plaine and good authority,
collected by a great critique, you may finde it affirm’d of the Assyrians, Indians,
Scythians, Persians, Dacians, Romanes; and of the Greekes too for their shields,
and otherwise: wherin Lipsius unjustly findes fault with Isidore, but forgets that
in a number of Greeke authors is copious witnes of as much.

NOTES (with thanks to Sjoerd Levelt)
Pridwen: Prydwen, name of the shield of King Arthur
Strabo (c.63 BC–AD 23): Greek geographer and historian author of a Geography
in 17 books
Carians Carians, the inhabitants of Caria, southwest Asia Minor. Herodotus credited
them with inventing the custom of decorating their shields.
Γοργολόφας: ‘he of the Gorgon-crest’.
Roger of Hoveden (d. c.1275): chronicler, author of Chronica
Matthew Paris (c.1200–59): Benedictine monk, chronicler and cartographer, author of several
histories, including the Historia maior