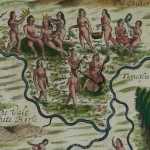 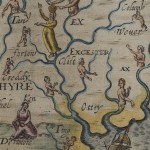 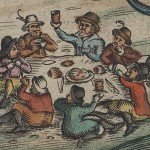 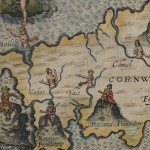 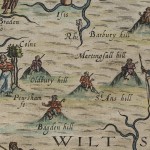 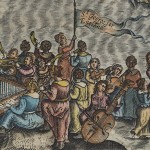 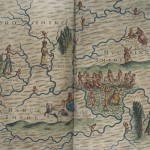 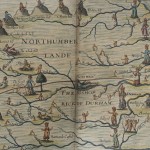 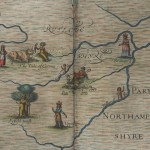 Quite the oddest set of maps of counties ever to be produced.
Alan G. Hodgkis

As a work of chorography, Poly-Olbion is anchored to the multiple districts it describes and, for the poem’s meaning to be appreciated, a working knowledge of British topography is required. In order to ensure that his muse’s detailed topographical descriptions would be fully understood by all readers, even those with shaky geographical recall, Drayton comissioned a series of maps (together with a decorative frontispiece and a dedicatory portrait of Prince Henry) from one of the most versatile and prolific engravers working in the reign of James I, William Hole (circa 1588-1624), who had already worked on Camden’s seminal Britannia (1607). The maps were to function as an “especiall help…lively delineating…every Mountaine, Forrest, River, and Valley, expressing in their sundry postures; their loves, delights, and naturall situations.”

The thirty maps would preface each Song, depicting the relevant topograhical features, providing both an overall plan of each region, as well as the sort of fashionable pictorial ornamentation suitable for an expensive folio volume. However, while fulfilling these basic requirements, Hole’s finished designs were nevertheless very far from being simply supplementary cartographic aides-mémoire. Instead, Hole created one of the strangest and most idiosyncratic visual worlds in British art history: a world which became forever fused with Drayton’s poetry. And it is that symbiotic relationship between poet and cartographer, the flow of ideas between image and text, that is so important to the Poly-Olbion project as a whole.

While this is taken for granted today, the maps and their significance were forgotten for many years; the first actual reference to their importance being published as late as 1854, when an anonymous essayist in the Retrospective Review wrote that among the “certain attractions of durable nature” of Poly-Olbion, there is “a series of poetic maps which are as singular in their construction.” When the 1876 edition of the poem neglected to reprint the maps, A.B. Grosart blasted the decision: “to deprive us of the maps is downright robbery. Historically, and in relation to the poem, they are as indispensable as an atlas in following a Livingstone or a Stanley.” It was not until 1933, however, that the Poly-Olbion was reprinted with its maps, when J.W. Hebel published the fourth volume of his edi- tion of Drayton’s complete works, prompting a reviewer in the Times Literary Supplement (August 31, 1933) to write that to “read the Poly-Olbion without the maps would be to miss not only a chance of understanding what Drayton would be at, but also a gentle, inexhaustable pleasure,” and only very recently that Hole’s work has begun to be fully analysed.

Although the maps were not drawn according to any particular, standardised perspective or scale, the topographical outlines are generally correct and similar to other England and Wales maps of the period. There was no need for political boundaries or practical considerations, such as road networks, however, and Hole could freely reconstruct the landscape as a mirror of Poly-Olbion’s poetic concerns and motifs. As the Songs lean on prosopopoeia to convey their meaning, so Hole’s maps are heavily peopled with anthropomorphised hills, forests, vales, isles and so forth. Human geography is minimal, with the exception of key historic cities and towns, represented by both male and female figures crowned by miniature buildings and frequently clutching appropriate and often complex emblems (Cambridge, for example, is represented as a maiden with a grail in one hand, a solar emblem in the other, a castle on her head, and milk-laden breasts). Flowing around this allegorical urban population, and providing each map’s visual structure and iconographic emphasis, are Albion’s rivers: each with its own tutelary nymph or river god emerging from the waters.