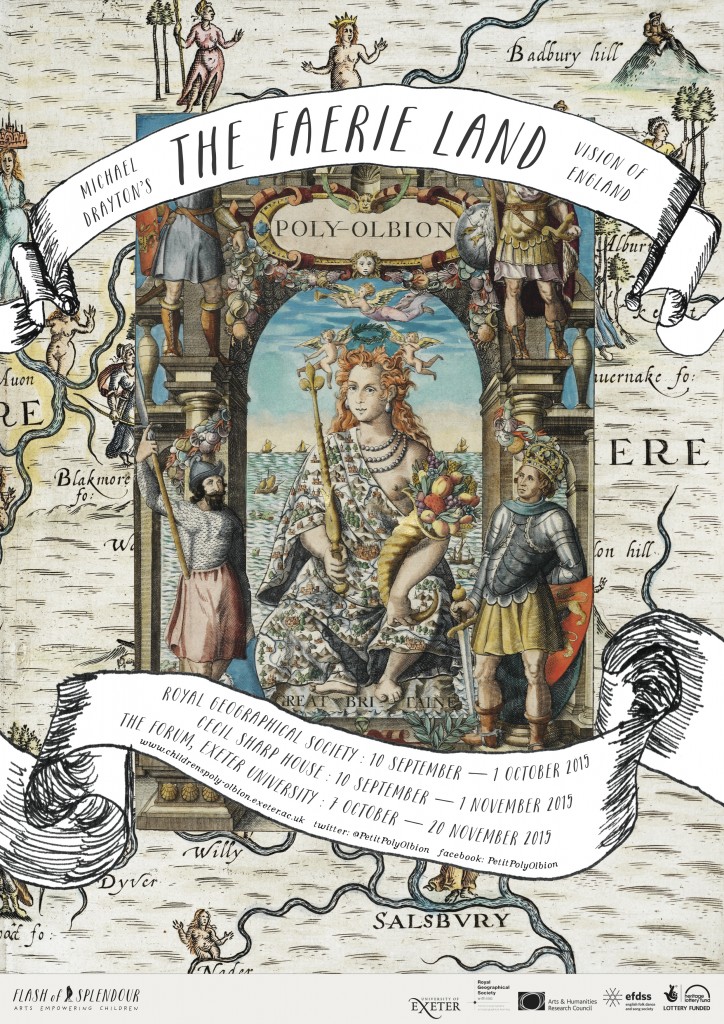 “It is thus that real fairies would speak if they existed.”
C. S. Lewis on Michael Drayton

Rivers sing and boast of their rich histories; ancient forests lament the axe; Welsh mountains threaten war; Fenlanders cross their watery land on stilts; giants wrestle invading Trojans on Plymouth Hoe; kings fly from ancient London temples and old Picts’ Wall fumes at being forgotten — Michael Drayton’s epic 15,000 line topographical poem, Poly-Olbion, published in two volumes in 1612 and 1622, is one of the richest, yet least known repositories of British landscape, history, folklore, local customs and commodities, and its influence ripples through our culture like an underground river.

A 12-year-old John Lennon carefully illustrated Drayton’s lines in his famous juvenilia notebook of 1952; Edith Wharton cited him as her favourite poet; Hardy knew swathes of Poly-Olbion, peppering references throughout his novels; Seamus Heaney once recited verses in his honour in the churchyard at Clifford Chambers, where Drayton summered, and it is said that Shakespeare spent the last night before his death in April 1616 in a “merry meeting” with Drayton and Ben Jonson, and “it seems drank too hard, for Shakespeare died of a fever there contracted.”

The Faerie Land, named for his alternate title for the poem, represents the first exhibition dedicated to Drayton and his Poly-Olbion. It is rooted in a collaboration between acclaimed children’s arts organization Flash of Splendour, the show’s curators and Exeter University, in which young artists with disabilities and innovative contemporary artists were invited to create new works based on the poem.

The installation features a specially commissioned map of England and Wales by artist-cartographer Stephen Walter, a new series of children’s illustrations by David McInnes (below, left), a series of powerful portraits of Drayton and his circle by 17 year-old artist Tim Yau (below, right), and an important collection of 17th century maps and books, including original copies of Poly-Olbion. 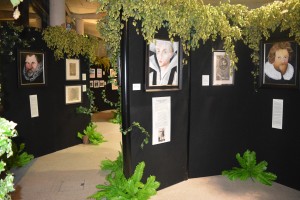 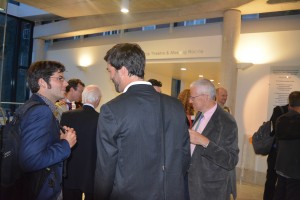 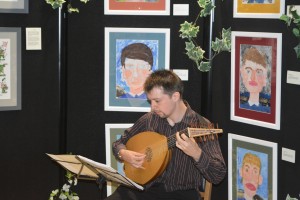 Richard MacKenzie, lutenist, at the preview 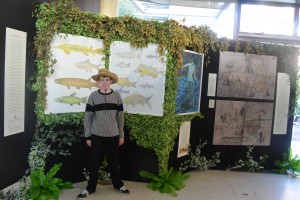 Alex Mulhall in front of his “Thirtie kinds of Fish”

“Michael Drayton…that Panegyrist of my native Earth; who has gone over her soil, in his Poly-Olbion, with the fidelity of a herald, and the painful love of a son; who has not left a rivulet, so narrow that it may be stept over, without honourable mention; and has animated hills and streams with life and passion beyond the dreams of old mythology.” Read more about the visiting the exhibition

Read more about the children’s artistic responses to the text

Buy postcards, posters and books from the exhibition shop