One of the most important outcomes of the Children’s Poly-Olbion has been the project’s contribution towards the implementation of a new working paradigm for delivering children’s outreach education, particularly educational strategies linking minority groups with “high” cultural material.

We feel that traditional barriers to confident access to that material amongst disabled and marginalised children can be thoughtfully dismantled through innovative partnerships, lateral, cross-discipline thinking and skilled, imaginative practice. We strongly support the huge benefits of using complex literature, particularly poetry and drama, within ALN and SEND education, especially with children and young adults with autism or communicative issues.

Within the project, we approached the text from multiple directions: the meaning of the poem shifting like a kaleidoscope depending on the group and individual. In Woodstock, at SENSS Ormerod, Rona Smith and Jane Rowles, for example, deciding to begin to translate, for the first time in history, the text into braille. Below are their Braille Translations, created in Grade 2 Braille on Braille paper and framed for the Royal Geographical Society: 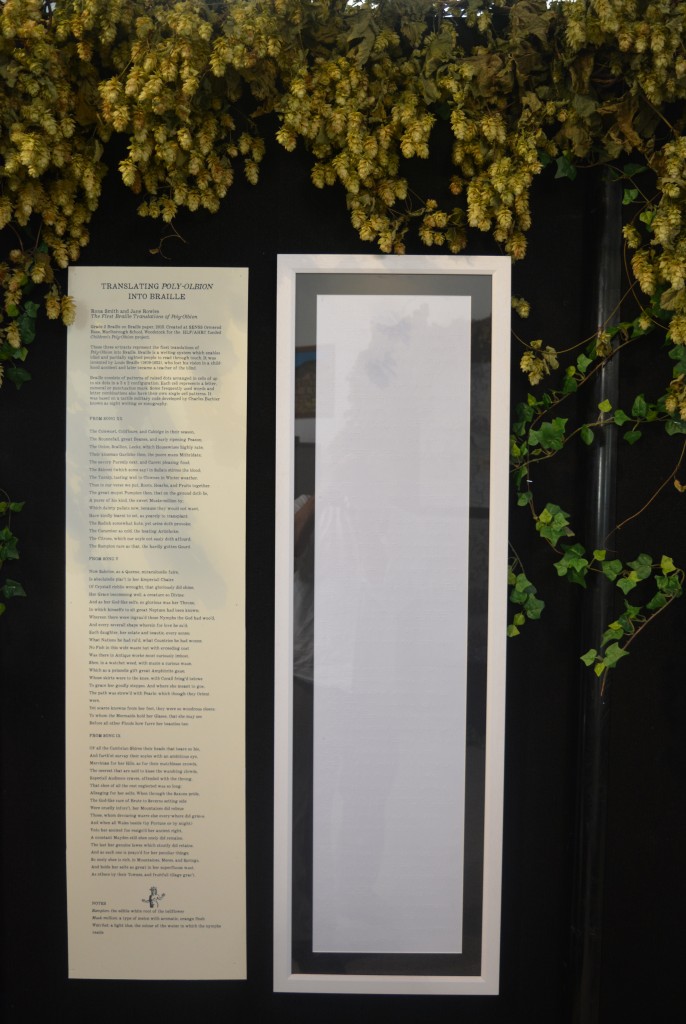 Extracts of Poly-Olbion translated into Braille

Braille is a writing system which enables blind and partially sighted people to read through touch. It was invented by Louis Braille (1809-1852), who lost his vision in a childhood accident and later became a teacher of the blind.

Braille consists of patterns of raised dots arranged in cells of up to six dots in a 3 x 2 configuration. Each cell represents a letter, numeral or punctuation mark. Some frequently used words and letter combinations also have their own single cell patterns. It was based on a tactile military code developed by Charles Barbier known as night writing or sonography.

The three extracts translated are as follows:

FROM SONG XX
The Colewort, Colifloure, and Cabidge in their season,
The Rouncefall, great Beanes, and early ripening Peason;
The Onion, Scallion, Leeke, which Housewiues highly rate;
Their kinsman Garlicke then, the poore mans Mithridate;
The savory Parsnip next, and Carret pleasing food;
The Skirret (which some say) in Sallats stirres the blood;
The Turnip, tasting well to Clownes in Winter weather.
Thus in our verse we put, Roots, Hearbs, and Fruits together.
The great moyst Pumpion then, that on the ground doth lie,
A purer of his kind, the sweet Muske-million by;
Which dainty pallats now, because they would not want,
Have kindly learnt to set, as yearely to transplant:
The Radish somewhat hote, yet urine doth provoke;
The Cucumber as cold, the heating Artichoke;
The Citrons, which our soyle not easly doth affourd;
The Rampion rare as that, the hardly gotten Gourd.

FROM SONG V
Now Sabrine, as a Queene, miraculouslie faire,
Is absolutelie plac’t in her Emperiall Chaire
Of Crystall richlie wrought, that gloriously did shine,
Her Grace becomming well, a creature so Divine:
And as her God-like selfe, so glorious was her Throne,
In which himselfe to sit great Neptune had been known;
Whereon there were ingrau’d those Nymphs the God had woo’d,
And every severall shape wherein for love he su’d;
Each daughter, her estate and beautie, every sonne;
What Nations he had rul’d, what Countries he had wonne.
No Fish in this wide waste but with exceeding cost
Was there in Antique worke most curiously imbost.
Shee, in a watchet weed, with manie a curious waue,
Which as a princelie gift great Amphitrite gaue;
Whose skirts were to the knee, with Corall fring’d belowe
To grace her goodly steppes. And where she meant to goe,
The path was strew’d with Pearle: which though they Orient
were,
Yet scarce knowne from her feet, they were so wondrous cleere:
To whom the Mermaids hold her Glasse, that she may see
Before all other Floods how farre her beauties bee.

FROM SONG IX
OF all the Cambrian Shires their heads that beare so hie,
And farth’st survay their soyles with an ambitious eye,
Merviniaa for her Hills, as for their matchlesse crowds,
The neerest that are said to kisse the wandring clowds,
Especiall Audience craves, offended with the throng,
That shee of all the rest neglected was so long:
Alleaging for her selfe; When through the Saxons pride,
The God-like race of Brute to Severns setting side
Were cruelly inforc’t, her Mountaines did relieue
Those, whom devouring warre else every-where did grieve.
And when all Wales beside (by Fortune or by might)
Vnto her ancient foe resign’d her ancient right,
A constant Mayden still shee onely did remaine,
The last her genuine lawes which stoutly did retaine.
And as each one is prays’d for her peculiar things;
So onely shee is rich, in Mountaines, Meres, and Springs,
And holds her selfe as great in her superfluous wast,
As others by their Townes, and fruitfull tillage grac’t.

NOTES
Rampion: the edible white root of the bellflower
Musk-million: a type of melon with aromatic, orange flesh
Watchet: a light blue, the colour of the water in which the nymphs reside