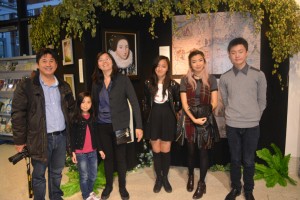 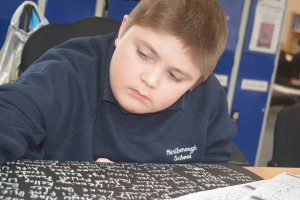 Working on “Broken Fragment of all the Tracts, Rivers…&tc”


The poetic image […] is not an echo of the past. On the contrary: through the brilliance of any image, the distant past resounds with echoes.”
Gaston Bachelard, The Poetics of Space

“The Children’s Poly-Olbion project…is going to utterly transform the way in which our literary and landscape heritage is delivered to young British people with learning disabilities.”
Miles Richards, Head, SENSS Ormerod Base, Woodstock

The Children’s Poly-Olbion is concerned with bringing Drayton’s world to glorious life for people who would never normally encounter his poetry or milieu. By the end of the project, we wanted the young participants to feel like Drayton, Selden and Hole were old friends, their mythic landscapes familiar terrain, their  words and images resonant and vital within their imagination.

Each school we have worked with has had varied and multiple student needs, with disabilities ranging from high-functioning ASD to PMLD, and their interaction with the text has reflected those needs. After initial workshops and support, each educational base was keen to carry on working on their own projects and field trips inspired by Poly-Olbion, supported by the Children’s Poly-Olbion team.

Fiveways, for example, who work with young adults with PMDL, took selfies in green spaces in Yeovil – for some, their first use of this cultural idiom – to understand the connection between identity and landscape explored in Drayton’s work. They also worked on sensory narratives drawn from historical sections of Poly-Olbion and translating sections of text into PECS (Picture Exchange Communication System), the first time an Early Modern text of this kind has been translated. Amy Norris, the teacher leading the Poly-Olbion work at Fiveways, has describes it as opening up vast new worlds for PMLD students and has used their work to additionally gain ASDAN certification for 12 students.

WESC Foundation worked closely with drama teacher Julian Davey and our group of highly-skilled undergraduate interns (Florence Millington, Joe Hennessy, Roisin Devine and Sarah Kozlowski) from the Drama Department at Exeter University, writing and producing a play and short film based on the life and attributes of Henry, Prince of Wales, the patron and dedicatee of Poly-Olbion, and art teacher Irene Boobyer and with visually-impaired artist, Barrie Goodfellow, with whom they explored the seas, rivers, lakes, springs and bridges of the text and maps, creating a series of textured paintings, weavings and collages. A very successful field trip to Totness was also delivered in September 2014, attended by the academic team and interns, with group workshops led by Steve Pratley and visits to Totness Museum, Castle and the Brutus Stone. A number of students also used the Children’s Poly-Olbion project towards Art Awards.

In Truro, Pencalenick School concentrated on mapmaking and the sea, closely focusing on Cornish material from Poly-Olbion. In Flash of Splendour workshops, students wrote songs and stories inspired by individual anthropomorphic figures in William Hole’s maps. Students also produced a series of new maps fusing Drayton’s vision of the land with their own and, with a specialist dance teacher, worked on creating new dances based on Song I.

Exeter House School in Salisbury also absorbed themselves within Drayton’s world, creating a play about Aurelius Ambrosius and the creation of Stonehenge (which they visited on a field trip), inspired by passages from Song III, VIII and IX, which was performed at Christmas 2014 and filmed by volunteer student film-maker Henry Fothergill.

An important part of the project was to forge new relationships between the schools, both students and teachers, creating a strong sense of a Children’s Poly-Olbion being created as a connected wider group. Four of the schools ~ SENSS Ormerod, Exeter House, Fiveways and Rowdeford ~ came together at a day-long workshop at the Royal Geographical Society in London on 2 June 2015, where Steve Pratley from Flash of Splendour led several sessions, with a morning group exploring Drayton’s relationships with Ben Jonson and Shakespeare and a larger afternoon group being directly engaged with extracts of the text through the rhythm and beat of Drayton’s 12 syllable Alexandrine meter.

The installations at the Royal Geographical Society, Cecil Sharp and Exeter University, also provided a further forum for schools to meet and compare experiences, creative work and methodology, and to forge friendships against a exuberant background of fierce pride in their achievements. Key to Flash of Splendour’s methodology is the idea of display, of being visible and seen in the world, as crucial to a child’s empowerment within a project. The three exhibition spaces are all very different, but share a national and international import within their fields (geography and exploration; folk music and arts; academia), which the children’s work gains in association. By placing their responses to Poly-Olbion in prominent spaces, usually occupied by professional artists and exhibitions, their ideas and creativity is appreciated for for what it is: a vital and equal contribution to literary heritage.

For more information and to find out some of responses by project participants, watch the project film: Read more about how we can work with your school

Read more about how we can work with your university