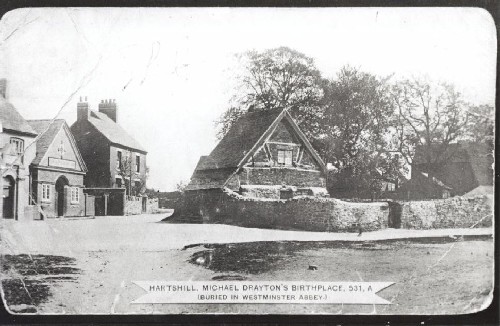 1563:  Drayton born in the half-timbered Chapel Cottage in the bucolic village of Hartshill, North Warwickshire.

1573:  Drayton serves as a page in the service of Sir Henry Goodere at Coventry and Polesworth.

1586: Sir Philip Sidney dies at the battle of Zutphen. Henry Goodere is assistant mourner at his funeral.

1590: Drayton settled in London “looking for laurels and patrons.”

1593: Idea. The Shepheards Garland, fashioned in nine eglogs, the first of Drayton’s series of pastorals, dedicated to Robert Dudley and modelled on Spenser’s Shepheardes Calender.

Peirs Gaueston, Earle of Cornwall, the first and longest of Drayton’s legends.

1594: Written in honour of Anne Goodere, Ideas Mirrour: Amours in Quatorzains, Drayton’s first sequence of sonnets, are published at the height of the vogue of the sonneteer. They also contained a miniature Poly-Olbion in sonnet form. His second legendary poem, Matilda: the Faire and Chaste Daughter of the Lord Robert Fitzwater, is published.

1595: Endimion and Phoebe, a fashionable mythological-erotic poem dedicated by Drayton to the Countess of Bedford. Its 516 couplets recount a sleeping shep- herd’s enraptured vision of the cosmos, with Elizabeth as the English moon.

1596: Dedicated to the Countess of Bedford, The Tragicall Legend of Robert, Duke of Normandy, the third of Drayton’s legends and unusual in its medieval structure is published with revised versions of Peirs Gaveston and Matilda.
Mortimeriados, a gory quasi-epic poem hacking through the “lamentable ciuell warres of Edward the Second and his Barons.” Marlowe’s Edward II was a strong influence.

1597: First publication of England’s Heroicall Epistles, earned for Drayton the title of “our English Ovid,” and was modelled on the latter’s Heroides. Comprises paired epistles between famous lovers that are dedi- cated to various distinguished aristocrats. It became one of Drayton’s most popular works. Countess of Bedford’s patronage is withdrawn, leaving Drayton extremely bitter.

1597-1604: In need of funds, Drayton turns to play-writing, collaborating with Anthony Mundy, Richard Hathway, Robert Wilson, Henry Chettle, Thomas Decker and others. During this period, he wrote more than twenty plays for the Lord Admiral’s Men and the impresario Philip Henslowe.

According to Francis Meres, Drayton is now working on Poly-Olbion.

1599: The First Parte of Sir John Oldcastle, Drayton’s only surviving play. On 26 October, the payment of ten pounds to Drayton and his usual hack syndicate of Anthony Munday, Richard Hathway and Robert Wilson, is recorded in Philip Henslowe’s diary. A further four pounds was paid to Drayton alone in December 1599 for the second part, now lost, which was per- formed the following March. The play is sometimes included with Shakespeare’s works.

Other events of the year, included Drayton visiting Scotland and having his portrait painted (the Laurel Wreath portrait in the NPG).

1603: Elizabeth I dies, 24 March. Drayton nearly ruins his career through his disastrous verses to the new king, The Majestie of King James: a Gratulatorie Poem, in which omits all reference to the late Queen, who had not yet been buried.

With copious alterations, Mortimeriados is rewritten as The Barrons Wars, with its dedication to the Countess of Bedford withdrawn by the angry and disappointed Drayton.

At his investiture as knight of the Bath, Sir Walter Aston makes Drayton one of his esquires.

1604:  Another encomium to the king is composed by Drayton: A paen triumphall: composed for the societie of the goldsmiths of London, congratulating his highness magnificent entering the Citie. It is completely ignored by James.

The Owle is published at some point before late April. Dangerously satiric (birds of prey intimated the aristocracy) and thus cloudy and ambiguous in meaning, it is probably Drayton’s most impenetrable poem. It will later influence Wordsworth.

1606: Poemes Lyrick and Pastorall: Odes, Eglogs, the Man in the Moone published. Contains a thinly veiled attack on the Countess of Bedford inconstancy in the eighth eclogue. Other key poems included in the volume include the spirited Battle of Agincourt and To the Virginian Voyage, one of the most important early Stuart meditations on colonialism and the New World.

1607:  Whitefriars Playhouse established, with the Children of the King’s Revels as the in-house company, led by Drayton.
The Legend of Great Cromwell first published. The first detached, critical attitude to the events of Henry VIII’s reign.

1612: Drayton is recorded as living in Fleet Street, next to St Dunstans-in-the-West.
Dedicated to Henry Frederick, the Prince of Wales, the first eighteen songs of Poly-Olbion, or, A chorographicall description of all the tracts, rivers, mountaines, forests, and other parts…of Great Britaine are published.

1616: Possibly apocryphal meeting with Jonson and Shakespeare at which the latter is said to drunk himself into a fatal fever.

1619: After years of revisions, Drayton publishes his collected works, Poems by Michael Drayton Esquyer, dedicated to Aston and containing all his poetry, much revised, except Poly-Olbion. The second state includes a portrait of Drayton by William Hole.

1627: The Battaile of Agincourt, a volume of miscellaneous works is published, which includes the immensely influential Nimphidia, the Court of Faery. Loathed by C.S. Lewis and Tolkien, the latter’s elves were in part a reaction to Drayton’s miniscule, fluttering fairies. However, Drayton confection was probably a satire of the court’s obsession with foreign fripperies, rather than a serious consideration of Otherworldly ontology.

In March, Drayton is involved in another lawsuit, relating to a possible dalliance with a married woman. The verdict is lost, but it seems likely that the court would have concluded that his accuser was lying.

1630: Drayton’s last book, The Muses Elizium, lately discovered, by a new way over Parnassus … Noah’s floud, Moses, his birth and miracles, David and Golia is published.

1631: 23 December: Drayton dies at his lodgings in Fleet Street. He leaves an estate of £24 2s. 8d. The night before he dies, he writes a love poem to Anne Goodere, preserved in a manuscript in the Bodleian Library, Oxford.

Drayton is buried in Westminster Abbey, in Poets’ Corner, under a monument with an epitaph by Ben Johnson commissioned by the Countess of Dorset. 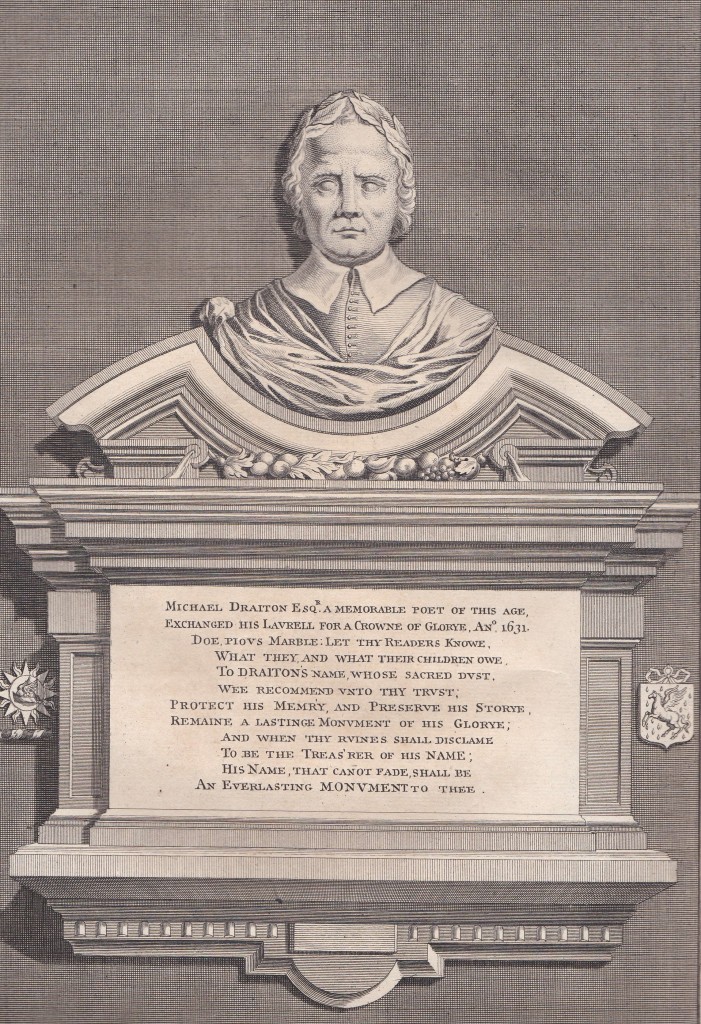