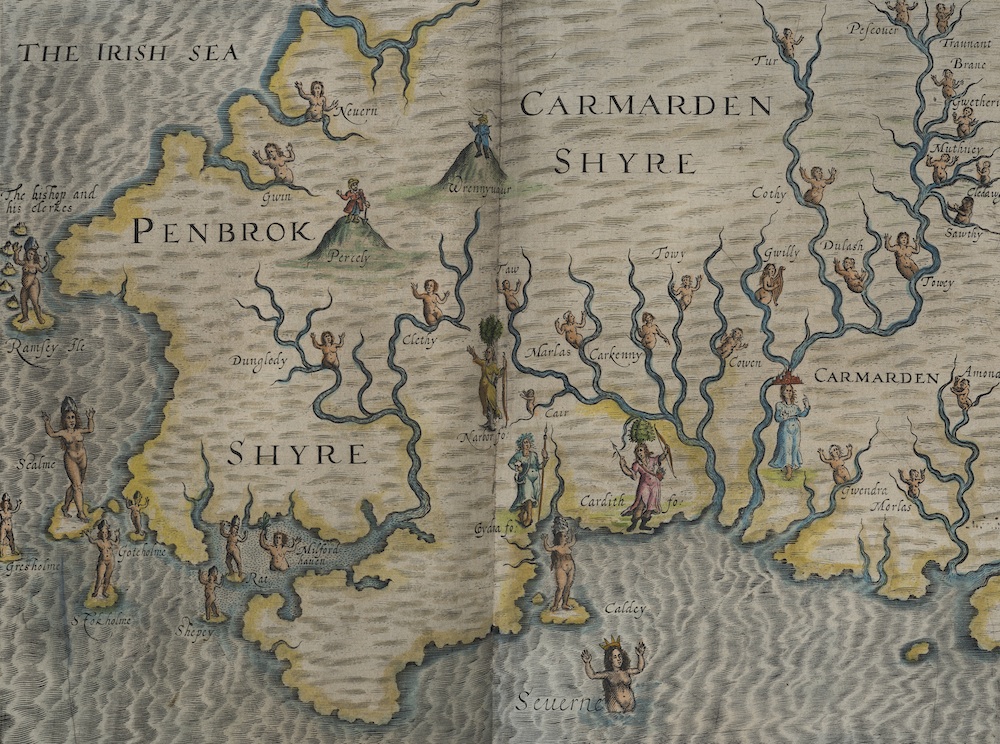 This map accompanies Song V, which opens with Severne or Sabrina, the tutelary nymph of the River Severn, who was drowned in its waters following the defeat of her father, Locrin, king of the Britons, talking of the dramatic contest in Song IV between England and Wales for the Isle of Lundy. She judges that the island belongs equally to both, referring to the restoration of “th’ancient Britan race” to the throne of Britain through its intermingling with the Saxon-Norman lines in the Tudor Dynasty and the unification of the “sever’d Realmes” of Britain with the accession of James I. As the poem moves onto West Wales, Drayton’s survey of Pembrokeshire and Carmarthanshire continues these themes of prophetic sovereignty and union as he describes the magical birth of Merlin at Carmarthen, and his body of prophecies which have run for “a thousand lingering yeeres..And scarcely shall have end till Time it selfe be done,” and which foretell the loss and eventual return of the crown to the Britons. Further issues of language, identity and the fall of empires are invoked with a description of the little-known colonising settlement of Dutch-speaking Flemings in Roose, Pembrokeshire, during the reign of Henry I, when the flooding of the Zuider Zee forced them from the Low Countries and they “were inforc’t to take them to their Ores, To trie the Setting Maine to find out firmer shores; When as this spacious Ile them entrance did allow, To plant the Belgian stocke
vpon this goodly brow.”

This Song is also known for its vignette of Pembrokeshire’s association with falconry. Poly-Olbion is shot through with references to birds: the journey of the poem is structured around flight and a bird’s eye vision of the land. Drayton’s hawk-like muse flies across Albion, alighting on mountains, by rivers, in marshy fenland, to expound on and sing the land’s stories. In Song 11, for example, Drayton writes, “with as unwearied wings, and in as high a gate as when we first set forth, observing every state, the Muse from Cambria comes, with pinions summ’d and sound.” The superiority of British hawks are celebrated with the passage on Milford Haven, a “most delightfull place,” and a favoured site for peregrines:

By nature with proud Cleeves invironed about,
To crowne the goodlie Road: where builds the Falcon stout,
Which we the GENTILL call; whose fleet and active wings,
It seemes that Nature made when most shee thought on Kings:
Which manag’d to the lure, her high and gallant flight,
The vacant sportfull man so greatlie doth delight,
That with her nimble quills his soule doth seeme to hover,
And lie the verie pitch that lustie Bird doth cover;
That those proud AIRIES, bred whereas the scorching skie
Doth sindge the sandie Wyldes of spicefull BARBARIE;
Or underneath our Pole, where NORWAIES FORESTS wide
Their high clowd-touching heads in Winter snowes doe hide,
Out-brave not this our kind in mettle, nor exceed
The FALCON, which some-times the British Cleeves doe breed.

Further exegesis is given by John Selden:
In the rockes of this maritime coast of Penbroke are Eiries of excellent Falcons. Henry the II here passing into Ireland, cast off a Norway Goshauke at one of these: but the Goshauke taken at the source by the Falcon, soone fell down at the Kings foot, which performance in this Ramage, made him yearly afterward send hither for Eyesses, as Girald is author. Whether these here are the Haggarts (which they call Peregrin’s) or Falcon-gentles, I am no such Falconer to argue; but this I know, that the reason of the name of Peregrin’s is given, for that they come from remote
and unknowne places, and therefore hardly fits these: but also I read in no lesse then Imperiall authority, that Peragrins never bred in lesse latitude then beyond the VII. climat Dia Riphaeos, which permits them this place; and that, of true Falcons gentle an Eiry is never found but in a more Southerne and hotter parallel: which (if it be true) excludes the name of Gentle from ours, breeding neere the IX. Per Rostochium. And the same authority makes them (against common opinion) both of one kind, differing rather in locall and outward accidents, then in selfe-nature.

NOTES
Cleeves: cliffs
Which we the Gentill call: the ‘Falcon Gentle’ is a female peregrine falcon: the tract on hawking in the 1486 Boke of St Albans associates them with princes and they have the highest status in Chaucer’s Parlement of Foules.
Spiceful Barbarie: the Barbary Falcon or Falco Pelegrinoides is native to the north coast of Africa (known as the Barbary Coast). It is similar in appearance to the peregrine, but is smaller in size. The first definite reference to the Barbary can be found in George Tuberville’s Faulconnerie and Havvking of 1575. Robert Dudley, Earl of Leicester, who set up the Barbary Company in 1585 was thought to have flown a Barbary.
Ramage: of a wild, untamed hawk; having left the nest, but as yet only capable of brief flights.
Eyess: a nestling, or young hawk taken from the nest.
Dia Riphæos: the seventh climate, beyond the Riphean Mountains, was the area of the world considered to be uninhabitable by the ancient geographers, but Selden is probably thinking of more modern climate divisisons here.
Per Rostochium: above Rostock.