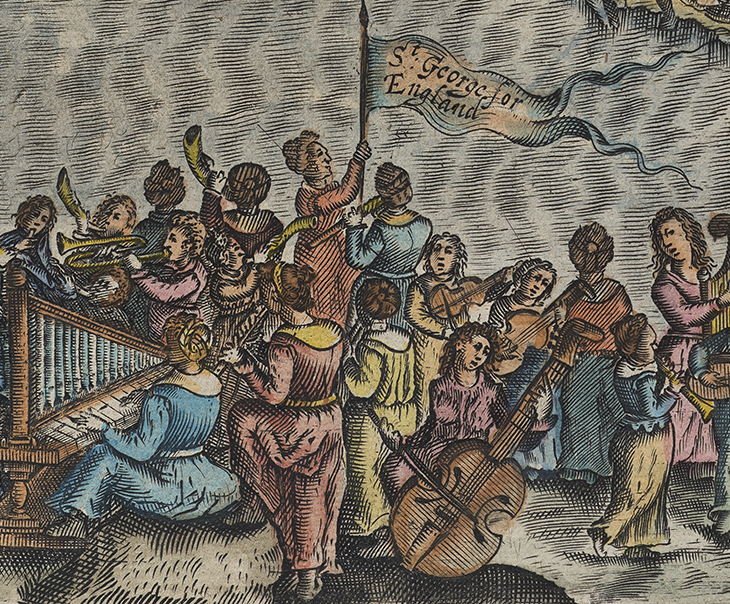 Divided into thirty Songs, Poly-Olbion is an inherently musical text.

In Song IV, we see the famous  singing contest takes place on the banks of the Severn Estuary. The contestants are the rivers pouring in from the English and Welsh banks. The prize is the Isle of Lundy in the middle of the channel of the Severn, who is to judge whether the island should belong to Wales or to England:

“VVhen now the British side scarce finished their Song,
But th’English that repyn’d to be delay’d so long,
All quicklie at the hint, as with one free consent,
Strooke vp at once and sung each to the Instrument;
(Of sundry sorts that were, as the Musician likes)
On which the practic’d hand with perfect’st fingring strikes,
Whereby their height of skill might liueliest be exprest.
The trembling Lute some touch, some straine the Violl best
In sets which there were seene, the musick wondrous choice:
Some likewise there affect the Gamba with the voice,
To shew that England could varietie afford.
Some that delight to touch the sterner wyerie Chord,
The Cythron, the Pandore, and the Theorbo strike:
The Gittern and the Kit the wandring Fidlers like.
So were there some againe, in this their learned strife
Loud Instruments that lov’d; the Cornet and the Phife,
The Hoboy, Sagbut deepe, Recorder, and the Flute:
Euen from the shrillest Shaw me vnto the Cornamute.
Some blowe the Bagpipe vp, that plaies the Country-round:
The Taber and the Pipe, some take delight to sound.”